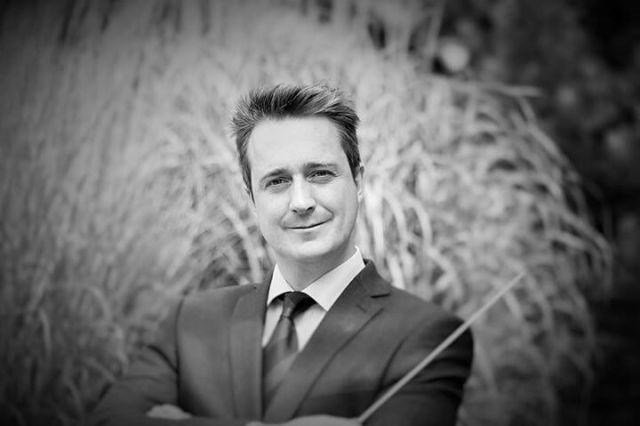 Andrew was born in Belfast, Northern Ireland in 1980, the son of William and Patricia both highly respected musicians. He grew up in Carrickfergus leaving as a teenager to study at the prestigious Chethams School of Music in Manchester, completing his A levels. He then attended the Royal Northern College of Music, completing a BA in musical performance. During his studies he received many awards, reaching numerous prestigious concerto finals. In 2001 he performed the Joseph Horovitz Euphonium Concerto with the National Symphony Orchestra of Ireland at the RTE Millennium Musician of the Future competition, live on Irish TV and was deemed to be runner up. His prize was the euphonium he still performs on today. During his time in the North West he performed with some of the finest brass bands in the country and was a member of the highly successful Yorkshire Building Society Band, under the direction of David King.

Andrew enlisted into the Army in January 2003 as a Euphonium player with The Band of the Royal Electrical and Mechanical Engineers (REME). During his time with the REME, he toured most of Europe and in 2006 was invited to Washington DC to perform recitals at the United States Army Band Tuba and Euphonium Conference (TUSABTEC); returning in 2007 to perform the concerto Of the Water, by Neal Corwell, in the presence of the composer with the United States Army Orchestra. In June 2007 Andrew was appointed as the Principal Euphonium of the British Army Brass Band.

In 2007 Andrew was selected to attend the Student Bandmasters’ Course at the Royal Military School of Music, Kneller Hall. At the end of the three year course, he gained a first class honours degree, receiving awards in conducting and the overall Academic Prize. His first assignment as a WO1 Bandmaster was to the Band of The King’s Division. Whilst with the King’s Andrew worked closely with local communities, enhancing the bands outreach programme and performing with the band regularly on BBC Radio Lancashire. In 2012 he took part in the Royal Edinburgh Military Tattoo and with the band, led the British Military Pilgrimage to Lourdes.

Andrew deployed out on Op HERRICK 18 in May 2013 and was assigned to the Afghan National Army Officers Academy (ANAOA) in Qargha, Kabul. As the Course Development Warrant Officer he worked closely with the education departments and mentors, helping to write and collate lesson plans. He also had to manage the Translation Pool, ensuring that lessons, minutes of meetings and doctrine were all translated accurately and on time.

After his deployment, Andrew was assigned to the Household Division as Bandmaster of the Band of the Irish Guards in February 2014. During his time with the ‘Micks’ he planned and presented the European Premiere of British composer Nigel Clarke’s visceral Symphony – A Richer Dust. He has also provided musical arrangements for the Queen’s Birthday Parade and the band’s latest CD, The Blue Plume. Andrew has participated in all of the major State Ceremonial Duties and led the band on a tour to support British Forces Germany.

In May 2018 Andrew was selected for a Staff Officer role as part of the HQ Household Division Bands in Wellington Barracks. This appointment required Andrew to be involved in some top level planning for State Ceremonial functions and allowed him to coordinate and plan a myriad of musical training, amongst many other crucial requirements.

In June 2019 Andrew was appointed as Officer Commanding of the Band of the Price of Wales’ Division, currently one of the British Army’s three Brass Bands.

In his spare time Andrew is a keen runner and in April 2019 completed both the Manchester and Blackpool marathons. He and his wife are together raising funds for Cancer Research UK and preparing to participate in the Great North Run. Andrew enjoys working with and helping community based bands in their musical output and activities. He has worked closely with Reading Spring Gardens, St Sebastian Wokingham, Friary Guildford, Sandhurst Silver Band, Trinity Wind Band and the Crawley Millennium Concert Band.

Andrew is delighted and proud to be the new Musical Director of his ‘home’ band, Morecambe and hopes to give the local community and beyond a band that they can be truly proud of; a band that will deliver engaging, interesting and fun performances. He is happily married to Carol, herself a musician and Flugel player in Morecambe and full time mum to James, Ruby  and Aoife.

There are no upcoming events.